Guy Plays World Of Warcraft All By Himself 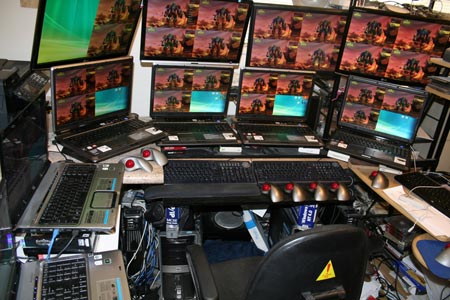 It’s a no-brainer that some people play WoW a little too much. MMORPGs have always been about investing an insane amount of time to develop your character. We won’t ridicule forum-goer Gamer Prepared who runs 36 accounts of World of Warcraft because after all, that requires a serious gaming rig. What better way to eliminate the entire purpose of playing in a MMORPG community full of other players by playing with only yourself.

Finding a guild is just too hard these days and dealing with newbies is horrendous. However, these aren’t the reasons behind Gamer Prepared playing 36 different characters. What’s the real reason? He wants to raid Ironforge and Stormwind with his guild. What a dork. It costs him $5711 in subscription costs per year and when he goes to pick up Wrath Of The Lich King, it’ll cost him $1500 for 36 copies of it. All of that money for one unsatisfying night of PVPing with 36 of your own characters with a town full of idle players and NPCs. Sounds fun.