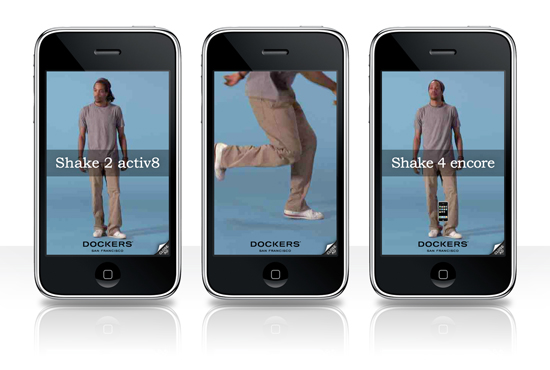 It was bound to happen eventually. Something tells me that this will be the equivalent of a pop-up for the iPhone generation. Dockers has introduced the first ever “motion-sensitive” ad to the Apple iPhone device. The ad will be featured in an assortment of the most popular iPhone apps.

The ad, titled “Shakedown 2 Get Down,” takes advantage of the iPhone’s accelerometer technology, encourages users to shake their phone in between game levels, in order to launch the ad, which features freestyle dancer Dufon. This is going to get very annoying, very quickly. I barely enjoy playing games which involve the accelerometer. Hasn’t my carpal tunnel been through enough?