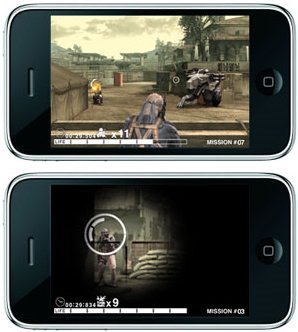 The iPod Touch has officially joined the league of the Nokia N-Gage as a handheld gaming console with Konami‘s Hideo Kojima announcement of the next Metal Gear game on Apple’s popular media device. The details and commentary after the jump.

“METAL GEAR SOLID TOUCH is an original game that brings to life the world and characters of MTAL (sic) GEAR SOLID 4 GUNS OF THE PATRIOTS (MGS4).

With direct control through the touch panel, it’s simple for anyone to move their alignment or switch to zoom mode.

Each stage’s location and characters are based on the story of MGS4. The initial download will contain 8 stages, with additional stages to be added later.

There are many ways to enjoy the game as points earned by clearing stages unlocks images and wallpapers from the METAL GEAR series.”

Could this be just another crappy remake of Metal Gear Mobile? I sure hope not. As of now, no details other than the press release have been made public. We’re skeptical as to whether this is an all new Metal Gear experience or if Konami just wants to rehash old dreadful N-Gage experiences. We’ll just have to wait and see.