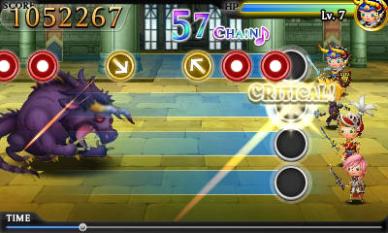 Further details are still scarce, but it seems that yes, this is indeed a music rhythm game with Final Fantasy themes. Many classic Final Fantasy songs will be featured (as remixes), such as “One Winged Angel” and “At Zanarkand”. You can even link up with friends for some 4-player Final Fantasy… uhh… rhythm-making.

Given that the official Japanese site for the game features a techno-ish remix of the classic Final Fantasy title screen song, it’s hard to say if Theatrhythm will be fun, or simply awful. Either way, Square should really consider changing the game’s name to be less of a mouthful.

The game will be released for the 3DS, though an official release date is still TBA.