Facebook is attempting to overrun their SMS and other mobile chat competitors by expanding their contact via phone number feature to messenger for iOS. 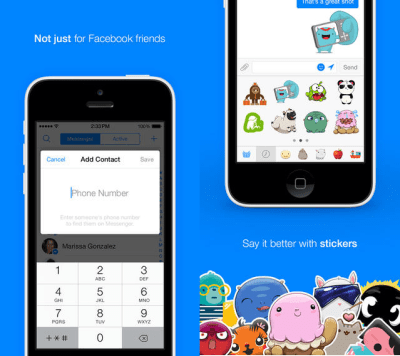 The add contact via phone number option was first launched on Android to a handful of testers in October and will shortly be made available to all Android and iOS users as well. The new update is beginning its rollout now and also features better navigation as well as faster start up and a cleaner more visually appealing layout.

Just what is the purpose of adding the contact via phone option? It’s simple really, Facebook doesn’t want users to switch to another contact method when you aren’t Facebook friends with someone whose phone number you currently have. Facebook was prompted to make this change when other chat programs began making this option available to users and increased exponentially in popularity. Facebook hopes that with this new move they will be able to increase their user base and decrease users relying on other chat programs.

Is it really feasible to think that people who are already utilizing some of the other chatting services which offer other built in features such as gaming, will throw away these programs and turn to Facebook messaging? We doubt it but we do still like the addition of the new feature.