Remember how Apple launched iOS 7 not too long ago? Yeah…well iOS 7.0.2 is already available for download. 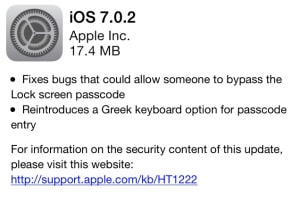 iOS 7 turned out to have at least one very important bug which prompted the iOS update, the ability to bypass the lock screen. Users discovered that they were able to get past the lock screen passcode and access various options on the phone without ever knowing the code – a definite “bug” if ever we heard of one.  Sure, the bypass option (which we won’t mention here because we’re not looking to encourage borrowing people’s phones to nose through their pictures) only allowed people to access the camera, photo and social media sharing options but still, that’s a pretty big deal.

What else does the iOS 7.0.2 update bring to the table? Users also have the option to have a Greek keyboard to utilize for entering passcodes.