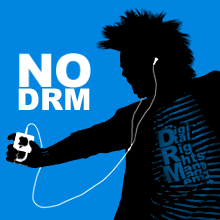 After the rumors running wild for about 24 hours now, EMI and Apple finally announced officially that EMI will now be offering DRM-free music to be sold on iTunes, and a higer audio quality than was offered before. This announcement spurs memories of Steve Jobs and his rant on DRM on the official Apple blog. Now that EMI has decided to release its music with the dreaded anti-piracy protection lifted, will other companies follow in its footsteps?

The new DRM-free music will be available at an audio quality of 26 kbps AAC format, twice the quality currently offered in the iTunes catalog. The new agreement also raises the price of these songs to $1.29 each, though Apple says they will still sell DRM enabled music for the $0.99 price tag. The DRM-free catalog will be available in May. No news on whether The Beatles will ever make it to iTunes. That subject was conveniently not announced. — Andrew Dobrow