Dude Cuts Car In Half to Fight the Law 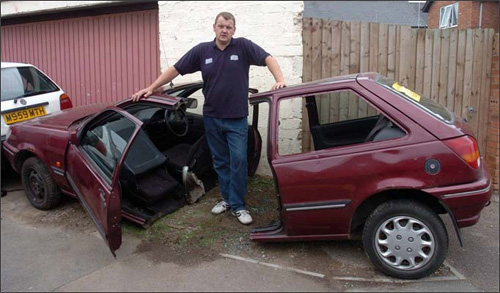 Don’t go pissing off Ian Taylor anytime soon. The Tredworth native has sawn his car in half with an angle-grinder after law enforcement put a boot on his car. Taylor claims just a small part of his back tire was sticking out of the driveway and was on the sidewalk, which is what prompted police to fine him.

Not happy about getting a $100 crap car booted, Taylor took an angle-grinding tool and cut his Ford Fiesta in half, instantly making him a local hero of sorts. He originally bought the vehicle for his stepson with the intention of fixing it up, but eventually gave up and must have said “Fuck it.” He must have just stopped caring, just like the designers of this monstrosity did.