Disappoint Your Daughter With The Ridemaster Pro Simulator 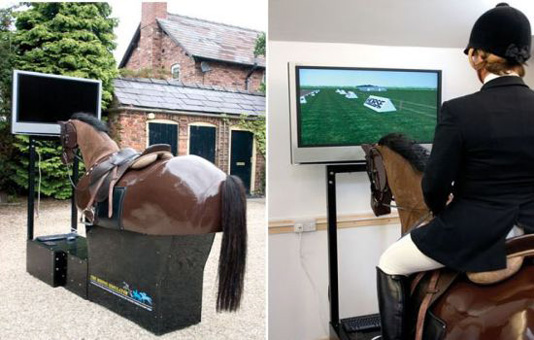 If you’ve grown up with young women in your household, you’ve more than likely have heard one of them begging Santa or the super flying Rabbi for a horse or a pony. Santa will usually assure the child that he’ll do his best but when Christmas comes along, there is no horse under the tree. The little girl loses all faith in humanity from that point forward, eventually becoming a satanic lesbian. I’ve seen it happen many times.

The Ridemaster Pro Simulator is no thoroughbred and will surely still disappoint, but at least it doesn’t feature a pile of horse shit that comes out of a living, breathing horse. Users will sit on a synthetic horse model that gives real time feedback as they stare at the video courses which are built into the system.With enough practice on the simulator, they’ll one day be able to ride a real horse or at least a large dog.