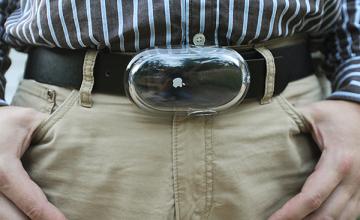 Belt buckles have become more than a necessity — many buckles are now being created as the ultimate fashion accessory for showing off your hobbies. Now, if you’re a real computer geek, you can wear your belt with pride by displaying a snazzy computer mouse belt buckle.

The story behind the creation of these buckles is actually pretty interesting. An engaged couple created a store on Esty to fund their upcoming wedding. The husband-to-be usually makes regular leather belts. However, one day he was going through a box of old computer mice, and saw that they were roughly the same size as belt buckles. A few modifications later — the computer mouse belt buckle was born.

No matter if you’re a Mac or PC enthusiast, there’s a computer mouse belt buckle for you. It’s fascinating how being a computer geek has morphed from being “uncool” to being an actual cultural phenomenon with its own fashion accessories.