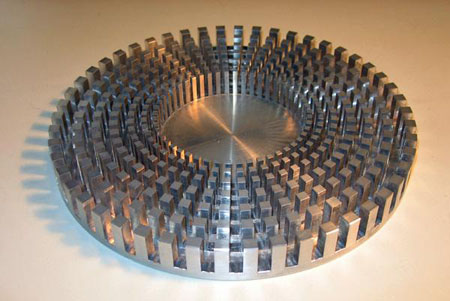 We haven’t covered much cloaking technology and that’s a shame because it’s starting to come into its own. Stefan Enoch at the Fresnel Institute in Marseille, France says that established cloaking principles, such as steering microwave light around an object, could be applied to ocean waves. Because cloaking technology is still in its infancy, scientists are still working on tackling 3-D objects, but we’ve got 2-D down. This works in our favor because waves are essentially 2-D.

To put this theory to the test, researchers built a prototype. The image above is the said prototype which is tested in a wave pool. Acting like a whirlpool, the device produces forces which pull the water along the concentric corridors as a result of the waves repelling off the pillars. This causes all the water to go everywhere except the center of the cloak. Think of the possibilities.