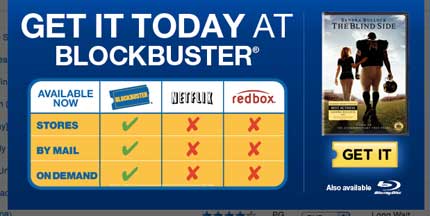 For the past two months or so, Netflix has been delaying the shipment of many Warner Bros. new releases by 28 days, a new mandate installed by the production company in order to allegedly provide a better user experience. Well, Netflix users should be enraged to see that Blockbuster signed a deal that allows them to both ship to their online customers and rent out their movies at their remaining brick and mortar outlets on the day of the actual DVD release.

Now, it’s pretty much common knowledge that Blockbuster was, and likely still is, on the brink of bankruptcy. So, they don’t have much to lose. In an effort to promote this new agreement, Blockbuster has even added a new pretty graphic to their site to show that they are the only one of the big three that has access to these new releases. Is this a last ditch effort to latch onto a new and frustrated user base? Is this enough to deter you away from Netflix?