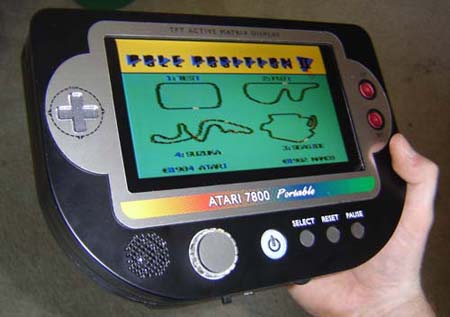 Following his creation of a portable Atari 2600, Ben Heck was hesitant to make the 7800 portable due to the complexity of the motherboard. But Ben didn’t let that phase him as he’s finally finished the portable Atari 7800. The motherboard was larger than the 2600’s thus the unit had to be larger, so Ben slapped a 7-inch wide screen onto it to make up for it’s bulky size.

The system, with its corpulent form, still weighs less than a gallon of milk and runs on rechargeable batteries.  Even the Sega Game Gear is jealous of this thing! Though Ben claims it’s portable; it will never fit in your pockets like a Game Boy Micro will. Then again, the Micro doesn’t have quite the game library the 7800 has.