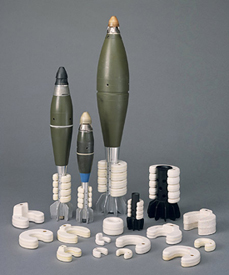 The United States Army has been using mortars for just about as long as the United States Army has existed. Of course, most early mortars were incredibly heavy and therefore could not be easily moved from one spot on the battlefield to the next. In the past few hundred years mortar technology has improved, but the same basic purpose remained the same: to launch artillery in the general area of where you think the enemy is.

Well, warfare has changed. Rather than fighting in open battlefields or deserted cities, we often find ourselves fighting in the middle of a highly populated area. Not wanting to harm civilians, the Army has developed a new form of mortar that uses a GPS receiver to allow the Army to, in a manner of speaking, steer the mortar to avoid civilians while “bringing the pain” to enemy combatants.

The Accelerated Prevision Mortar Initiative (APMI) takes a standard M934 120mm mortar and inserts a GPS receiver into the nose. Once the mortar is launched, the GPS system will be able to manipulate the fins to adjust the trajectory of the explosive to ensure that it lands within ten meters of its intended target. The advantage of this, apart from the improved accuracy, is that mortar teams would not have to carry as many rounds with them because they wouldn’t have to lay down a volley of fire.