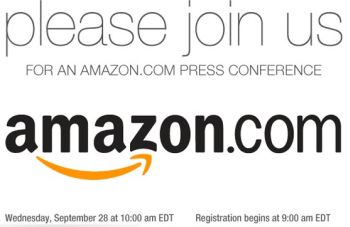 Next Wednesday (September 28th), Amazon.com will be holding their long-awaited press conference. According to most sources, this is going to be the “official” release announcement for Amazon’s Kindle tablet PC, which has already created quite the buzz in the tech world. The Kindle device itself has been incredibly popular, and Amazon’s tablet would combine their e-reader with Amazon’s market for movies, music and TV shows.

The speculation surrounding Amazon’s tablet has already named it as some tough competition for Apple’s iPad.

If Amazon announces their Kindle tablet on September 28th, it’ll be interesting to see when the official release date (as in, when tablets will ship) will be. We’re guessing that it will be later than early estimates, which would put the release date sometime in October. Hopefully.