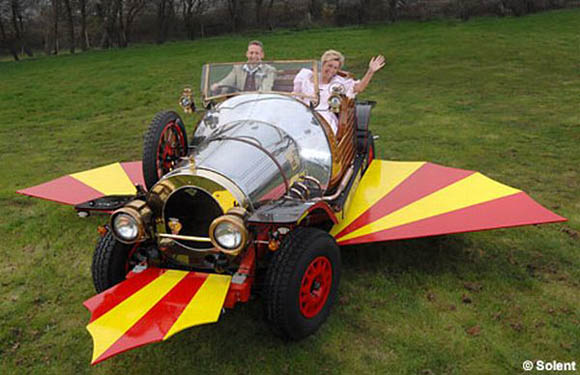 This is not a man who takes challenges lightly. When the daughter of Stuart Wallis from Ringwood town in Hampshire, England, challenged him to create a car similar to the flying vehicle seen in the 1968 film Chitty Chitty Bang Bang, Wallis took it very, very seriously. So serious did he take this challenge, in fact, that only three months later, he presented his daughter with this, a 1976 Land Rover turned Chitty Chitty Real Real.

Wallis spent Ł1,000 ($1,562) on a 34 year old Land Rover and spent a quarter of a year stripping it down and painstakingly rebuilding it in the image of Dick Van Dyke’s magical hunk of scrap metal turned flying racer. While this contraption isn’t capable of taking to the sky, it does pack a 1,000-watt amplifier under the hood and loud speakers so that it can scream hits from the film, as well as eight sets of air horns which can create animal noises and police sirens.