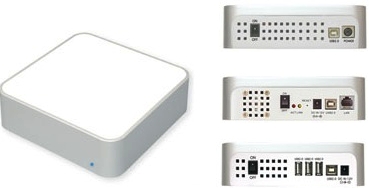 Been wanting to turn your Mac mini into a home media center, but don’t have enough storage space for all your movies and music? You’re in luck, as Kuroutoshikou of Japan has announced four new external drive enclosures designed to compliment the Mac mini. Done in the same silver-and-white style as the mini, the enclosures also match the mini’s dimensions, allowing you to stack them. Best of all, these enclosures have room for a full-sized 3.5″ drive, enabling you to pair your mini with one of those 750GB vertical drives.