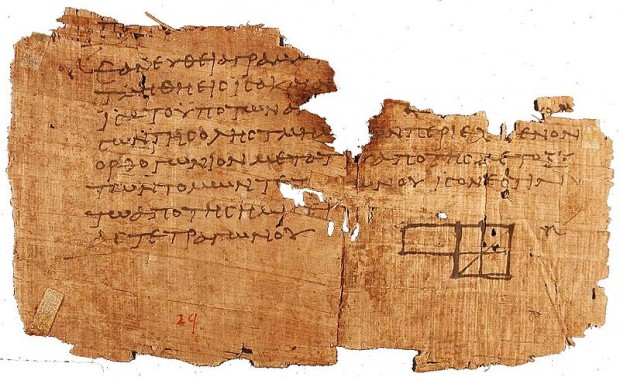 One of the earliest versions of a geometric diagram, in a papyrus fragment dating to the first century of the common era. It illustrates Proposition 5 in Book II of the Elements of Euclid. Part of a vast trove of Greek papyrus manuscripts (including Bible passages, contracts, and magical spells) excavated in the late nineteenth century and now held at the University of Pennsylvania), it was made in Egypt, in the provincial city of Oxyrhyncus in the upper valley of the Nile, four centuries after Euclid. And below, the diagram accompanying the proof of the Pythagorean Theorem in another manuscript of the Elements that of the 13th-century Persian mathematician Nasrudeen al-Din al-Tusi. 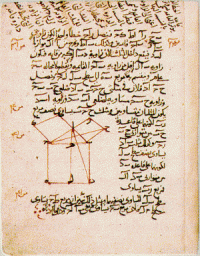 The Greek mathematical mystic Pythagoras lived in the 5th century BCE; not only philosophy, but the alphabet itself, was in its infancy. No manuscript of the Elements from Euclid’s hand, much less his own time (the 3rd century BCE) survives to this day.

Historians of technology have pointed to the advent of the printing press in the West as the watershed moment for scientific imagery—for only with printing do images become repeatable and thus reliable. Reckoned from this perspective, the proofs of Euclid are like durable, bug-proof code: with the reasoning clearly elucidated, even a poor or incorrect diagram conveys the substance of the argument. And yet classically—before the advent of algebra, at any rate—it would have been hard to call the propositions proven until they had been worked out visually. With Euclid’s Elements, text and imagery conspired to keep vital ideas alive for nearly three thousand years.