What If The World Were A Cube And Not A Sphere?

Once in a while an article will catch our attention and force us to think, this article from Gizmodo is such an article, how would gravity be different if the world were a cube? 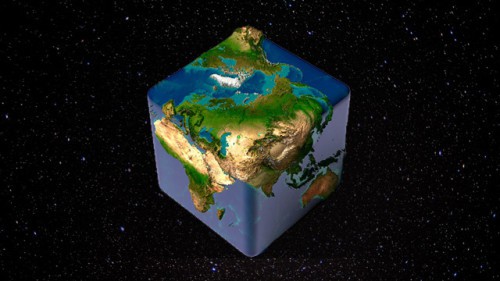 The laymen in us – which tends to significantly defeat the physics nerd who is more than a little limited – is a little overwhelmed with the sheer technical talk from the original Gizmodo article however, we have broken down a few points to help you to understand just what a square Earth would mean…

– One each of the six square faces of the square planet there would only be up/down gravity toward the centers of each of the cube faces.

– The weather on each cube face would be more temperate than current global temperatures.

– Water bodies on each cube face would be centralized.

– The extreme polar and equatorial temperatures of today’s globe would be non-existent.

– The corners and edges of the square planet would not be contained by the Earth’s atmosphere which essentially means that each cube face would be considered its own world.

– The land on each cubical face would slope downward to the center of the cube making each cube face have a basin like structure which would hold the centralized bodies of water.

– The distance from the low point to the high point of each cube face will approximate 2,300 miles.

– Your weight will become less as you travel from the center to the edge of each cube surface.

Bizarre? You bet, but it’s a lot easier to understand the implications of a cube world for those of us who are less physics inclined when laid out in bullet points like these!