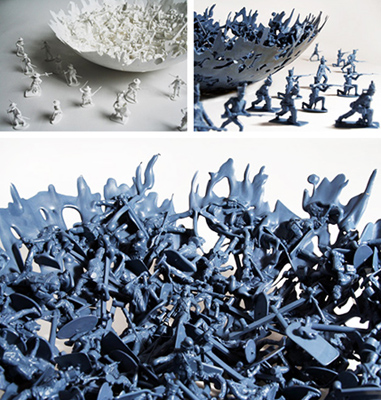 Melting plastic army men is loads of fun. Real army men, however – well, that’s an entirely different story. Dominic Wilcox either had a troubled childhood, or he was just as normal as the rest of us. After all, melting army men with a magnifying glass is every adolescent’s favorite pass time, right?

He’s taken this fun, yet childish activity and turned it into art by melting the army men together to form a bowl that he’s cleverly named War Bowl. The War Bowl comes in two versions: a blue Battle of Waterloo, Half British Artillery, half French Infantry and the white ‘English Civil War’ War Bowl. While you might not put anything in it, that’s not preventing it from looking awesome.