USAF: Building Supercomputers — One PS3 at a Time 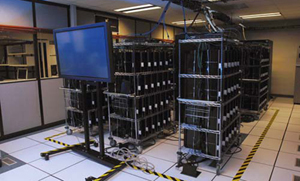 Cue the Government, who commissioned $2.5m to the project. Rome Lab, the USAF organization in charge of the project, spent the money buying as many PlayStation 3s as they could — 1,700.

The end result? A supercomputer built on a budget that was roughly 10x smaller than what it would have cost to build a computer of equal processing power. Another, happier side effect, is that the Condor (its official name) uses only a fraction of power that a typical supercomputer would need. Of course, this is still 1,700+ PS3s all being turned on at once, so power consumption would be marginal regardless.

At present the Condor is being used to high resolution images, with the end result being that “jobs that used to take hours or days now take seconds,” according to project director Mark Barnell.

Barnell also advises that “in a couple of years, this will fade away” in favor of computers with equal processing power that uses smartphone processors, which will allow future computers to be roughly the size of your fist.