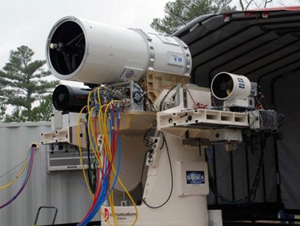 As I have stated before, lasers are awesome. They just are. They make everything better, they provide countless hours of entertainment and, when you’ve had some “questionable substance” with friends, flashing lasers set to Pink Floyd’s Dark Side of the Moon is the greatest thing to ever happen.

And now the Navy has one.

The United States Navy and Northrop Grumman have completed a series of field tests on the Maritime Laser Demonstrator, a prototype high-energy laser design that is meant to show the world that you can use a laser to destroy things. For instance, the Navy used the potential weapon to sink a small boat. While this is nifty, we shouldn’t expect lasers to replace traditional munitions.

From a science and technology point of view, the marriage of directed energy and kinetic energy weapon systems opens up a new level of deterrence into scalable options for the commander. This test provides an important data point as we move toward putting directed energy on warships. There is still much work to do to make sure it’s done safely and efficiently.

Yeah, they say that now, but… it’s just a matter of time…