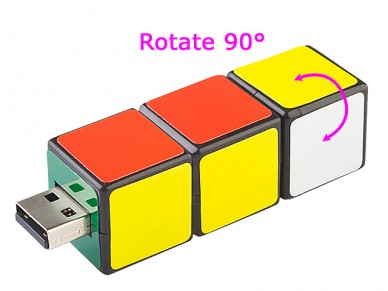 The Mini IQ Cube is a thumb drive with a twist: borrowing its design theme from Rubik’s Cube, the USB jack pops out when the outermost cube is rotated. Otherwise it’s a standard portable flash drive in 2, 4, and 8 GB versions, ranging from $17 to $32 in price. But it suggests a fun, puzzle-based approach to hardware interfaces. Wouldn’t it be cool to have an external hard drive rendered in the form of a full Rubik’s Cube, with the option of navigating and searching files by working the puzzle?

In fact, some inventors are going far beyond the likes of gimmicky flash drives to build charismatic, powerful, toylike electronics. MIT’s Media Lab in particular is a familiar source of such innovative thinking about hardware interaction. I think of MIT Media Lab alumnus David Merrill, whose “Siftables” combine the kinesthetic fun of toy blocks with intuitive, image-rich computing. Here’s Merrill’s demo of Siftables at the 2009 TED conference:

Since that talk, Merrill and colleagues have formed a company called Sifteo to bring the product to market. Attention, developers and game designers: they’re hiring.