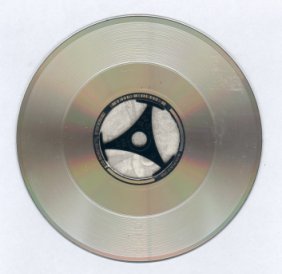 Aleks Kolkowski’s exhibit at the Futuresonic 2008 festival in Manchester is turning heads. He owns an original vinyl cutting device intended for making 45rpm records that is now being used to draw grooves in CDs.

During the festival, spectators were invited to bring in their old, unwanted CDs and have them etched with a song so they can be played on a turntable. Talk about regression!