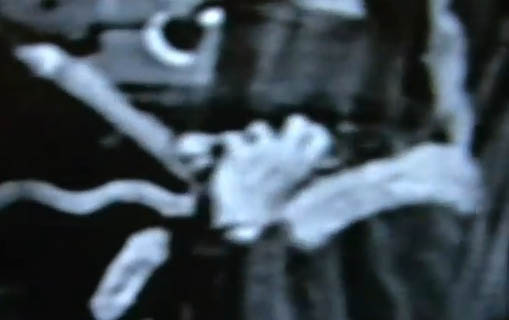 Now THIS is weird. George Clarke from Yellow Fever Productions was watching a documentary clip filmed in 1928 for the Charlie Chaplin film “The Circus” and he saw something that caught his eye. The clip in question recorded attendees of the film’s premiere at Manns Chinese Theatre in Hollywood, CA. In one scene, an older woman dressed in black, with most of her face hidden behind a large hat, is seen walking down the street by herself, quietly talking into a black device that looks eerily like a modern mobile phone. George’s conclusion? It’s a time traveler dressed in drag.

While theories abound, some claim the device seen in this scene is an old-timey hearing aid. But a few things remain unclear. First off, electronic hearing aids were not wireless in 1928. Also, there is no one in sight for the woman to be listening to or talking to. But to the other side’s defense, there would have been no cellphone towers in 1928 to inhibit the use of a mobile phone. But who knows. Maybe this time traveler is from a time we have yet to reach — a time where cellphones don’t need towers. Or maybe it’s a German spy. We might never know. I know it’s not too far in the future because it’s not a white iPhone. But damn, if it’s not intriguing… Hit the jump to see the video.