There’s A Party In My Mouth: An Oral Extravaganza 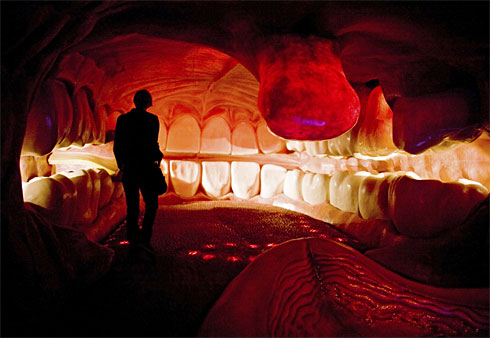 For a moment we thought that Julia Roberts was finally allowing spectators to tour her gigantic pie hole, but now it sees as though we were misled. This gigantic mouth is actually a a new attraction at Corpus, a half-amusement park, half-museum in Amsterdam, which recently opened up a their interactive feature which allows visitors to explore large models of the human body.

Visitors will get the chance to “enter the museum through the knee, then travel through eight exhibit spaces, heading up toward the brain. On the way, they can watch a 3-D film on fertilization, bounce on a rubber tongue while they follow a sandwich being digested and throw beanbags against a video screen to destroy bacteria.” Not to mention, use the airbag sized uvula as a human punching bag. — Andrew Dobrow