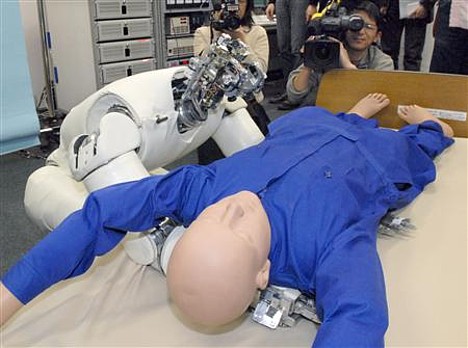 Strongest Man competitors should be worried. They might have some non-human competition this human sized android who has been showcasing its lifting power over in Tokyo. Most recently, the Japanese lifting robot was spotted on display, lifting a 66 lb package off of a desk, and lifting a human-sized doll weighing 145 lbs. The 154 lb, 61 in tall android was designed by an engineering team at the University of Tokyo, recently underwent a software upgrade to make it move more like a human by constantly checking the power levels on its 1800 tactile sensors embedded in its skin.

Rather then being controlled through powerful motors, this robot gets its strength from its sensitive sensor control. Safer for in home use compared to motor controlled bots. Professor Yasuo Kuniyoshi, head of the engineering team which designed the robot says, “Only a small amount of power is applied at each of this robot’s joints, but it can successfully move heavy objects by using the tactile sensors to regulate how it lifts and carries things.” Engineers hope to one day use a similar robot in nursing homes and by moving companies. — Andrew Dobrow