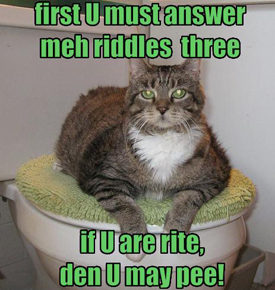 In America our researchers are working on things like determining whether or not bitter foods and drinks turn you into a prick, while in China their researchers are apparently attempting to build the USS Enterprise. So what do researchers do in other parts of the world? Well, if you’re a researcher at the University of Twente in the Netherlands you’re probably looking at urine.

There’s a reason, I assure you.

You see, according to Dr. Mirjam Tuk and her associates, you’re more prone to making wiser, more logical decisions when you feel like you’re about to burst.

People are more able to control their impulses for short term pleasures and choose more often an option which is more beneficial in the long run… The brain area sending this signal, is activated not only for bladder control, but for all sorts of control.

How did they test this theory? With cold, hard cash. Well, Ł18 ($35), anyways. See, the researchers asked two groups of people, one in dire need of a restroom and one who wasn’t a series of questions, and were asked to make decisions between two rewards: Ones that were immediate but small, or ones that were delayed but larger. The ones needing to drain the lizard, surprisingly, exercised patience:

They were asked to make eight choices ranging from small, and immediate, rewards to larger, but delayed, ones including choosing to receive either $16 (Ł10) tomorrow or $30 (Ł18) in 35 days.

They concluded that people with full bladders were better at holding out for the larger rewards later.

Curious data, but I wonder if this was just a fluke or if it has to do with cultural differences more than biological differences. I say this because, well, I don’t know about you but I have a hard time thinking to unlock a door, let alone think about philosophical questions like “immediate reward now vs. greater reward later.”