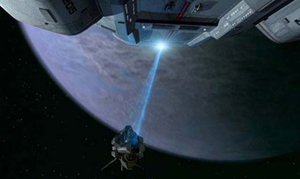 Last week it was a cloaking device and now it seems that Chinese researchers have devised a way to create a tractor beam from existing laser technology. But, just because they have a theory for doing so doesn’t mean that it’s easy.

The concept of a “tractor beam” kind of flies in the face of conventional physics. You see, photons have a minuscule amount of momentum that essentially pushes on whatever they come in contact with. What Jun Chen and his associates at the Fudan University claim to have done is find a way to pull on these photons through the use of a laser.

From the report “Backward Pulling Force from a Forward Propagating Beam:”

Here, we show that it is possible to realize a backward scattering force which pulls a particle all the way towards the source without an equilibrium point. The underlining physics is the maximization of forward scattering via interference of the radiation multipoles. We show explicitly that the necessary condition to realize a negative (pulling) optical force is the simultaneous excitation of multipoles in the particle and if the projection of the total photon momentum along the propagation direction is small (as in some propagation invariant beams), attractive optical force is possible.

For those of you who don’t want to read the full report, I’ll summarize: Provided that there is no gradient a laser can be used to pull photons towards the source. Of course, as with all good science this would have to be proven before more eyes turn towards it.

On a side-note: Was there a Star Trek marathon on China State TV recently? Cloaking devices, tractor beams… if I see a story about transporters in the next week, I’m going to start asking questions.