Sony Alpha Rumors.com have got their hands on pictures of the ultimate smartphone add on for photographers, the Sony smartphone camera lens. 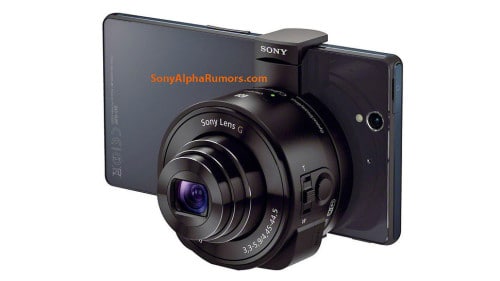 Smartphone cameras have progressed over the years, but any true photographer will tell you that nothing can equal the talent of a true camera. Sony is attempting to do a little something about that though. The Sony smartphone camera lens is being referred to as the DSC-QX10 and the DSC-QX100 (two distinct models) and is actually a camera and not just the lens. Where the smartphone will provide the traditional camera display, the lens itself will feature sensors, a Bionz processor, Wi-Fi and NFC wireless capabilities, and even an SD card slot. The difference between the two models is that one will feature the same one-inch sensor as the Sony RX100 II, and the other will feature an 18 megapixel sensor with a 10X zoom.

Sony has yet to reveal any details on the camera itself but if this leaked info is anything to go by, this could be a great idea for the photographer in your life…provided that they don’t actually want to have a portable smartphone all the time.