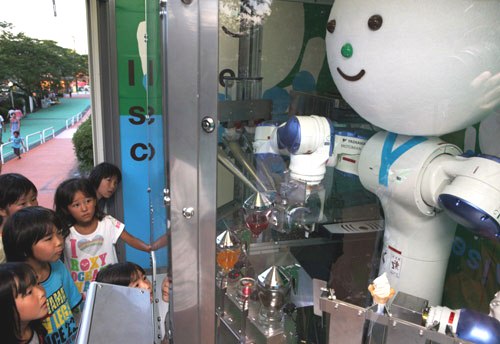 Japan’s newest media darling, unlike similar stars in the U.S., is famous for all the right reason. He puts a smile on the face of Japanese children and he makes ice cream. No meltdowns (at least none that aren’t caused by actual heat), no drunken photographs. Just the promise of sweets and a fun robotic show.

Lovingly called Yaskawa-kun by the Japanese populous, customers use a touch screen to order their favorite ice cream flavor and toppings. Yaskawa-kun does the rest. Currently, Yaskawa-kun is working for the Tokyo Summerland theme park and will be replacing the human ice cream makers until August 22. Humans are still obligated to do the eating themselves… for the most part. Hit the jump for a video of the robot in action.