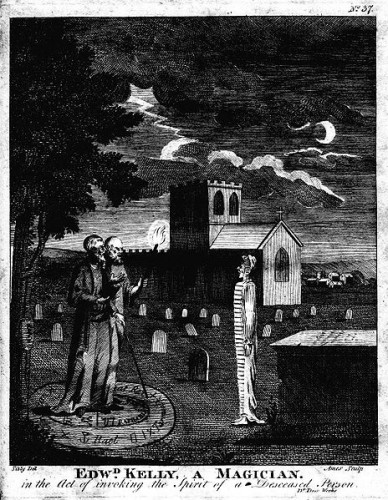 From Yahoo to Alta Vista to the Google imperium, search has become more and more magical in its powers. But what if what you’re really looking for isn’t an answer, but a question? What if you’re not calling up data, but evoking spirits?

Over at HiLobrow, Gearfuse friend Peggy Nelson describes Scryberspace, which might best be described as an uncanny search engine:

#scryberspace plays with the sense of occult anticipation that we bring to even our everyday computer use. To scry is to search, and to interpret the signs. And to scribe is what much of our online interaction is literally composed of: we write, and write, and write again. We write acronyms, long rants, hyperlinks, emoticons. We code both communication and secrecy. We write to express ourselves and to invent ourselves anew, to conceal, to reason, to seek, and to connect.

Pose a question at Scryberspace, and then wait—this is slow search—and in a matter of hours or days, your query is answered in the form of a tiny work of Internet art—like this sound collage, returned in response to the eminently-googleable question, “who filibustered the treaty of Versailles?”:

Scryberspace’s avatar and resident shade, John Dee, was a 17th-century English astronomer, mathematician, and esoteric savant. Fortunately, he’s available on Twitter, where he gathers questions to scry. Go and pose your question; you’ll be commissioning a work of digital art, and starting your own juices running as well.