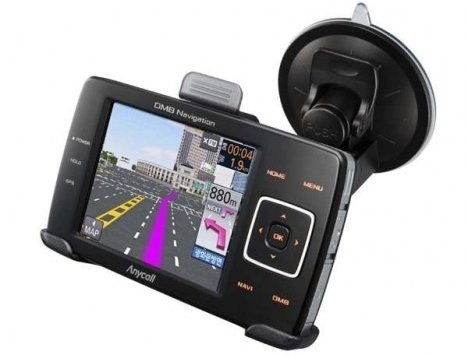 Samsung just released the STT-D370, a new GPS navigator in Korea that is the first of its kind; it connects to cellphones via Bluetooth. Oh, and it has Transport Protocol Experts Group (TPEG) and terrestrial DMB, but those aren’t as important as hooking up with your cellphone, obviously. This is supposed to be great because it allows someone to make calls, receive calls, or send TXT messages without having to lay a hand on a cell phone. This is great and all, you know, not having to look at a cell phone while you’re driving and all, but wait, aren’t you now looking at a different screen to do the same function.

One cool program the navigator will have is a built-in 3D map, which shows the road in front of you and directions where to turn. This is amazing: now you can look at the road and a virtual image of the road at the same time. The STT-D370 also functions as, whadda ya know, a GPS navigator, which gives the driver an optimal route and updates every 5 minutes. Basically if you buy the STT-D370 by Samsung, you’ll be paying $600 for a pretty normal GPS navigator so you can look at a little bigger screen instead of your cell phone. — Nick Rice