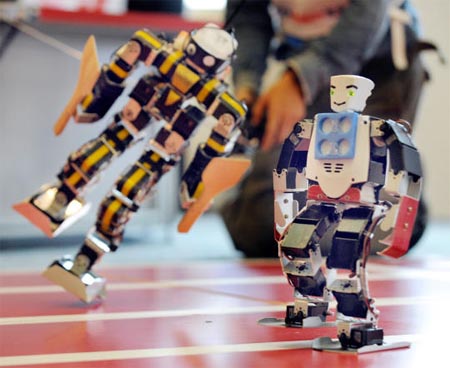 Sure, watching the most impressive athletes in the world sprint a 500M is probably the most entertaining thing you’ve see in a long while, save for these racing robots from the the annual Robot Athletic Meet in Tokyo’s Akihabara district.

Check out the robot on the left. He’s playing for keeps. It might appear as if it’s falling over due to his unstable infrastructure but, in actuality, it is ready to bulldoze Mr. Goody-two-shoes over on the right. And don’t think he won’t be able to topple him over, either. He’s got those bitchin’ tonfas on his robot arms. Could he be a ninja robot? Inconceivable.

Editor’s Note: The one on the right looks like Ryan.