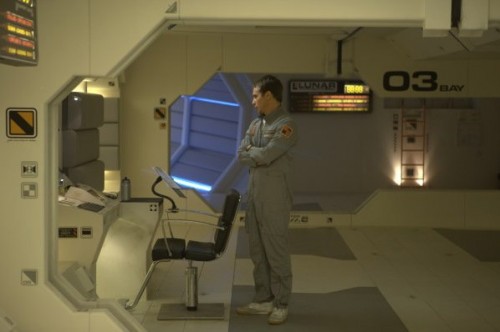 When a friend of mine working for Popular Mechanics invited me to a private screening of the movie Moon, I naturally hopped on the chance. It’s director Duncan Jones’ (David Bowie’s son, natch) first full-length film and it was made on a shoestring budget of $5 million. But enough about that. What did I actually think of the movie? Click on, my friends.

The plot involves an astronaut named Sam Bell (played by Sam Rockwell) who is stuck on the Moon farming some kind of mineral that’s used for energy back on Earth. Without giving too much away here, Jones really went after classic sci-fi movies and added his own touch. Elements of 2001: A Space Odyssey and Alien are present throughout the film, especially towards the end as Sam rockets towards Earth in a small space capsule.

There are very few characters in the movie. Aside from Sam, there’s his wife and a computer called GERTY that’s voiced by Kevin Spacey. The movie has its moments and for a five million dollar film, it looks fantastic. But at 97 minutes long, what should be a short film feels like an eternity. Sam is always performing repetitive tasks and leaving his lunar base in the same lunar vehicle. It gets a bit monotonous after awhile, but right as I was about to stretch my arms and yawn, some kind of twist would be thrown in. The main twist in the movie is that Sam is a clone. Without revealing any more details, let’s just say it works well.

In summary, Moon is an eerie thriller that most sci-fi nerds will enjoy. Duncan Jones has a fantastic movie on his hands that will no doubt recoup the $5 million budget if distribution is planned correctly by Sony Pictures. Any 2001 fan should see this film although anyone who isn’t into outer space will find themselves quite bored with themselves halfway through the film.

Moon is slated to hit theaters in New York and Los Angeles on June 12th. Check it out.