Pope Francis Says That The Big Bang and Evolution Are Real 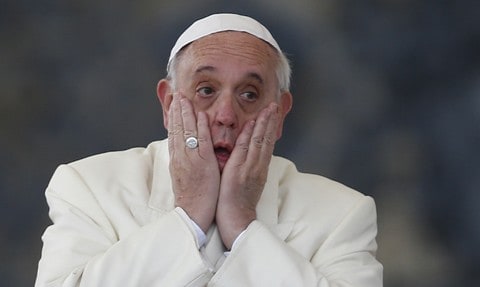 If I’ve said it once, I’ve said it a million times. Pope Francis is the best, smartest, most cuddly pope of all time.

In a surprising plot twist, Pope Francis, speaking at the Vatican, announce his belief in the Big Bang (I could hear the capitol letters in his voice) and evolution.

“The beginning of the world is not the work of chaos that owes its origin to something else, but it derives directly from a supreme principle that creates out of love,” Pope Francis said. “The Big Bang, that today is considered to be the origin of the world, does not contradict the creative intervention of God; on the contrary, it requires it. Evolution in nature is not in contrast with the notion of [divine] creation because evolution requires the creation of the beings that evolve.”

The Pontiff said God created beings “and let them develop in accordance with the internal laws that he has given to each one.” He said: “When we read in Genesis the account of creation [we are] in danger of imagining that God was a magician, complete with a magic wand that can do all things. But he is not.”

You heard it here first. GOD IS NOT A MAGICIAN. So wipe those stereotypical images of God with his black cloak and top hat out of your mind.