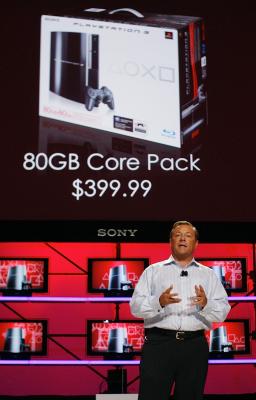 Sony announced Tuesday that it will cut the price of the 80GB version of the PlayStation 3 from $500 to $400 for this fall in an effort to compete with Microsoft’s Xbox 360 and to attract “millions of PlayStation 2 users who are on the cusp of upgrading,” Tretton said. However, if you’re one of those said PlayStation 2 users and all you do is play classic game compilations or 2D fighting games, then making the upgrade now holds little favor for your calloused thumbs.

While dropping the 80GB down to the 40’s price, Sony will be discontinuing the 40GB model, forcing would-be customers into a $400 dollar affair. Now, if Sony had kept the 40GB model and dropped its price tag down to $300, that would’ve really showed Microsoft that its got balls. Maybe next year.