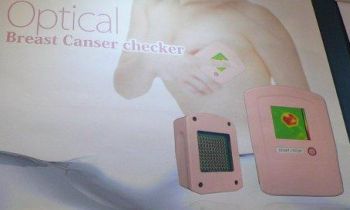 Ever feel uncomfortable going to the doctor for regular breast cancer exams? Well, Japan’s Nihon University could have a solution. At the Medica 2011 conference, they advertised what could only be classified as a ‘portable breast cancer detector’.

Apparently, this tiny device is small enough to be held in one hand, and uses something called “phase shift method” to detect potentially cancerous growths. This technology uses light emitting and receiving elements to “map out” an image of the breast. Cancerous portions show up as a slightly different color on the device’s screen, allowing for easy detection.

While this sounds like something out of a sci-fi movie, it’s important to remember that this device is still in early prototype mode. There’s no news on when (or if) it’ll be released to hospitals or the public.

And yes, there is a typo on the advertising image used at the Medica conference — “Canser” instead of “Cancer”.