New Vibrating Glove Technology — No, It’s Not a Sex Toy 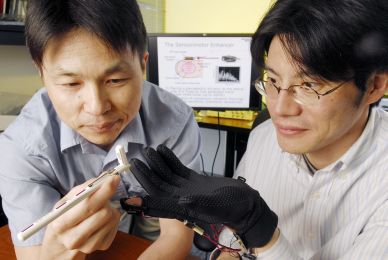 Actually, neither of these are true, believe it or not. The vibrating glove is actually a glove designed to improve the sensation of “feeling” by adding subtle vibration. Think of it as adding “white noise” to wearing a traditional glove. Researchers are hoping that this could lead to real world applications for the technology — such as giving people who have nerve damage the ability to feel the sensation of touch.

Another proposed real world application for this tech would be to help people who have jobs which require “high precision manual dexterity”, which could be improved by having a heightened sense of touch.