Need That Appendix Yanked Out? Pull It Out Your Mouth 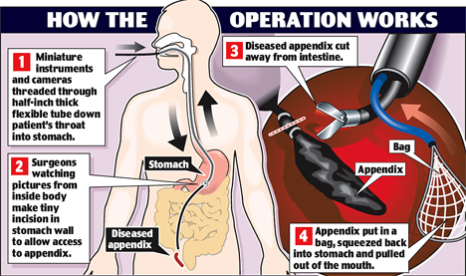 No one likes having to go into a hospital for major surgery. I doubt that was the main reason for coming up with this new, non-invasive procedure that allows doctors to remove your appendix sans pain. It may be a little uncomfortable, but it sure beats having your guts cut apart.

The procedure works as follows: A miniature camera and tube are sent down the patient’s stomach. Doctors then look around and make a TINY incision in the stomach and cut away the appendix. Afterwards, a small net-like bag is used to scoop up the appendix and everything is then pulled out the mouth, organs included. Why have the surgery? According to one patient, he was “doing sit-ups and eating pizza” a day later. Impressive!