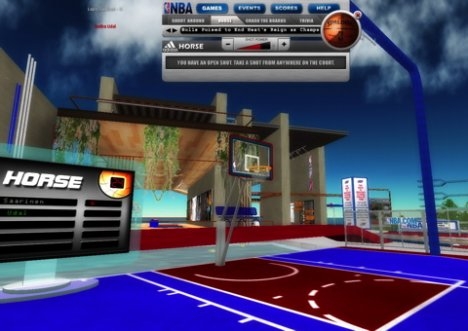 Do you got game? Do you at least have Second Life? Great. Good news for you. The NBA has officially opened shop on the popular social virtual world.

The NBA launched its presence in the virtual world of Second Life this morning, following an in-world press conference yesterday that featured NBA commissioner David Stern making the announcement. Built out by the Electric Sheep Company (sponsors of this blog), the NBA region in SL features a basketball arena, streaming video of classic NBA games and more recent highlights, virtual NBA merchandise (natch), and four half-courts where fans can play HORSE or enter dunking contests.

Ya know? I never really got into Second Life, but I haven’t been on there in at least a year. It might be worth another try. Maybe buy my avatar some pimp jerseys. — Andrew Dobrow