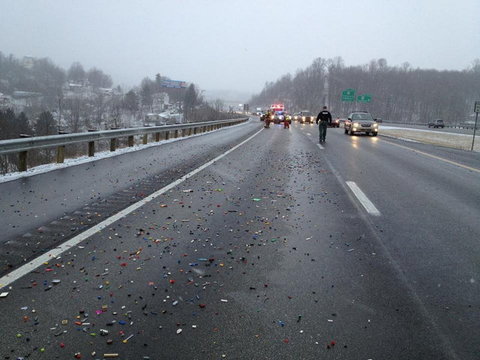 A portion of I-79 running through Harrison County, West Virginia was shut down Tuesday afternoon after a mysterious LEGO spill occurred across multiple lanes of the highway. Interstate 79 was reduced to one lane as workers cleaned up the most fun driving obstruction ever.

How did  this LEGO disaster occur? ‘Tis still a mystery. But if I had to guess, I’d say a giant LEGO man had a few too many to drink, took his LEGO car out for a spin, smashed into the guardrail and shattered.

A sad tale with a good message. Don’t drink and drive kids. It might result in thousands of LEGOs mysteriously spilled in your general area. That would just be awful.