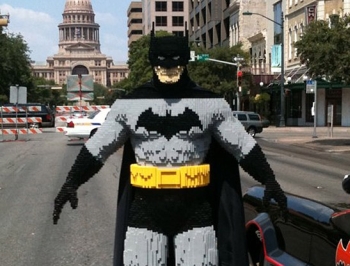 Evan Bacon is not your average 13-year old kid. When he sees a pile of LEGOs, he doesn’t stop to search for directions. No, Evan’s an innovator, and the creator of an incredible life-size LEGO sculpture of Batman.

Evan’s sculpture is made of 15,000 to 20,000 LEGOs, and took him a full three months to build. Though LEGO Batman may look intimidating, his insides are actually hollow, making him easy to carry at only 60 pounds. The blocks are fully glued, which is probably a good thing.

Evan’s LEGO Batman has won multiple awards, and has even impressed the man Adam West himself.

To make transporting his LEGO Batman easier, Evan has even divided his creation into three separate parts. Way to go, Evan.