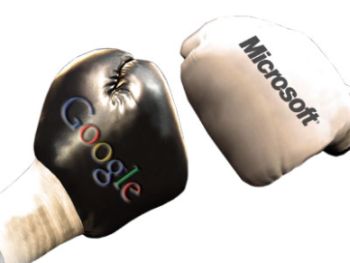 Microsoft’s head of communications — Frank Shaw — has finally posted an inflammatory response to Google’s latest bashing. If you don’t know the bashing I’m referring to, it was a blog post by Google’s head legal dude, which said something like this:

It’s not surprising that Microsoft would want to divert attention by pushing a false “gotcha!” while failing to address the substance of the issues we raised. If you think about it, it’s obvious why we turned down Microsoft’s offer. Microsoft’s objective has been to keep from Google and Android device-makers any patents that might be used to defend against their attacks.”

So, Shaw retaliated over a series of tweets from his Twitter account. A sample of his response:

We offered Google the opportunity to bid with us to buy the Novell patents; they said no. Why? BECAUSE they wanted to buy something that they could use to assert against someone else. SO partnering with others & reducing patent liability across industry is not something they wanted to help do.”

Alright, Google. Ball’s in your court. This is better than Network TV!