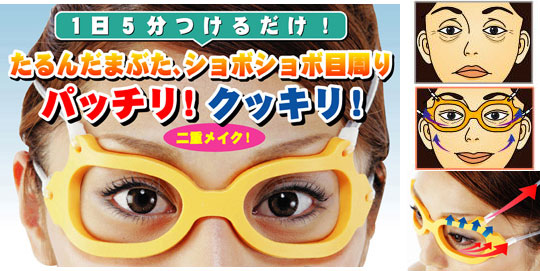 While Botox is definitly effective for wrinkle-busting and age preservation, it’s also extremely proficient in the art of paralyzing your facial muscles, leaving you largely unable to communicate your emotions. The Mejikara Anti-Wrinkle Glasses probably aren’t anywhere near as effective as Botox (if at all), but they’re painless, noninvasive and of course, Japanese.

Wearing the Mejikara glasses for a mere five minutes a day will allegedly work wonders for your wrinkles and anti-aging efforts. According to Japan Trend Shop, the glasses have “specially-designed ridges which massage and help your skin. It puts gentle pressure on the skin and pushes those sagging eyes back up to where they once were.” Certainly sounds like a Japanese innovation to me.