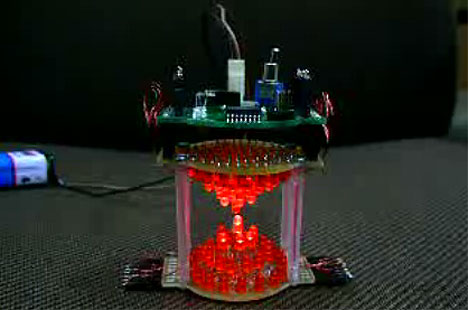 In the beginning of the month, we wrote about a design project in which college students created a digital LED hourglass. It seems to have been a hit considering that the hourglass earned enough buzz to garner itself a new dimension. Making it the new and improved 3D LED hourglass.

The LED’s are arranged in a conical, circular design which produces the new look for the weeks old project. A Z-action accelerometer allows the device to detect its orientation and to produce the hourglass effect in the right direction. Kudos to Dhananjay Gadre and Anurag Chugh for pulling off the revisionist design. Just when we thought hourglass technology had reached its pinnacle. Check out the video after the jump.