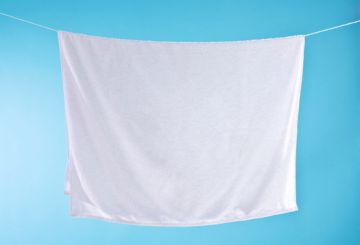 Doing laundry is so passé.

Chemists at the University of California at Davis have discovered a way to modify ordinary cotton fabric so that it becomes “self-cleaning”.

Now, before you get excited, this cloth doesn’t automatically remove actual dirt. Instead, it actively kills bacteria on the fabric when it’s exposed to light. The secret behind the science is a compound called “2-AQC”. When the compound is incorporated into the cotton fabric, it reacts to exposure to light by producing reactive oxygen species (like hydrogen peroxide). This allows the cloth to kill bacteria and break down toxins — like pesticide chemicals.

Even if this discovery doesn’t mean you’ll be tossing your washing machine anytime soon, it does have potential applications in the medical field, as well as for the military.