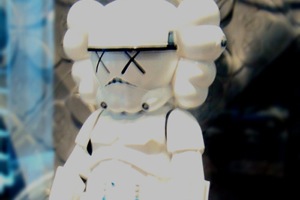 Design superstar Kaws got the inspiration for his latest creation from the iconic Star Wars Stormtrooper. This figurine combines Kaws’ signature skeleton with the classic uniform of the evil Imperial clone troops.

Details about the Kaws stormtrooper are in short supply, but Hypebeast says it’s rumored to be a limited release for the OriginalFake store in Tokyo. This isn’t the first time Kaws has made a piece influenced by Star Wars. Last year, he made a Darth Vader figurine that was also an exclusive for his Tokyo store.