Icahn to Yahoo!: Your Ass Is Mine 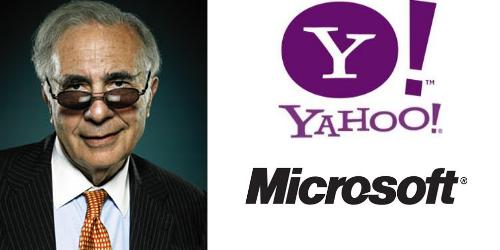 The Fourth of July has passed and now we’re stuck on a Monday with a big week ahead of us. However, nobody’s week will compare to that of Jerry Yang’s. Jerry is CEO and co-Founder of Yahoo!, a dying Internet company you probably use daily. Today, money-maker and powerhouse Carl Icahn issues a letter to Yahoo! shareholders telling them that the current board at Yahoo! must be ousted, including Yang. Why’s this? Icahn and Microsoft’s Steve Ballmer have been chatting about Yahoo! recently. Check out choice quotes from Icahn’s letter:

Much has been said about how badly the Yahoo! board has “botched up” negotiations with Microsoft over the past months. There is no need to keep pointing out the mistakes I believe Yahoo! made by not immediately taking a $33 offer made by Microsoft. But one thing is clear — Jerry Yang and the current board of Yahoo! will not be able to “botch up” a negotiation with Microsoft again, simply because they will not have the opportunity.

— If elected, I have little doubt that the new board, subject to its fiduciary duties, will do what the current board will not do, i.e.,

— Immediately start negotiation with Microsoft to sell the whole company or, in the alternative, sell “Search” with large guarantees.

— Move expeditiously to replace Jerry Yang with a new CEO with operating
experience.

Things are not looking good for Yahoo! or Yang. I give it six months before Microsoft is finished purchasing the company and replacing Yang with Icahn. Thoughts?