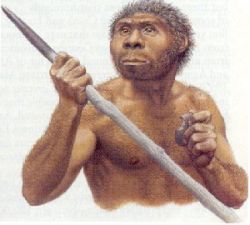 The human species has come far, right? Well, in a surprising new development, scientists have confirmed that humans ate cooked food as early as 2 million years ago.

The tooth size from Homo erectus to Homo sapiens gradually decreases, showing that humans were able to eat much softer food. In fact, H.erectus had teeth that were significantly smaller than earlier humanoids. According to researchers, this suggests that humans had adapted and evolved to eat cooked food by the time the H.erectus humanoid genus was around.

The going theory is that since humans had evolved by this time to eat cooked food, it made it easier for them to gain more nutrients from food items. This gave them more time to perform other tasks, and paved the way for further brain development.